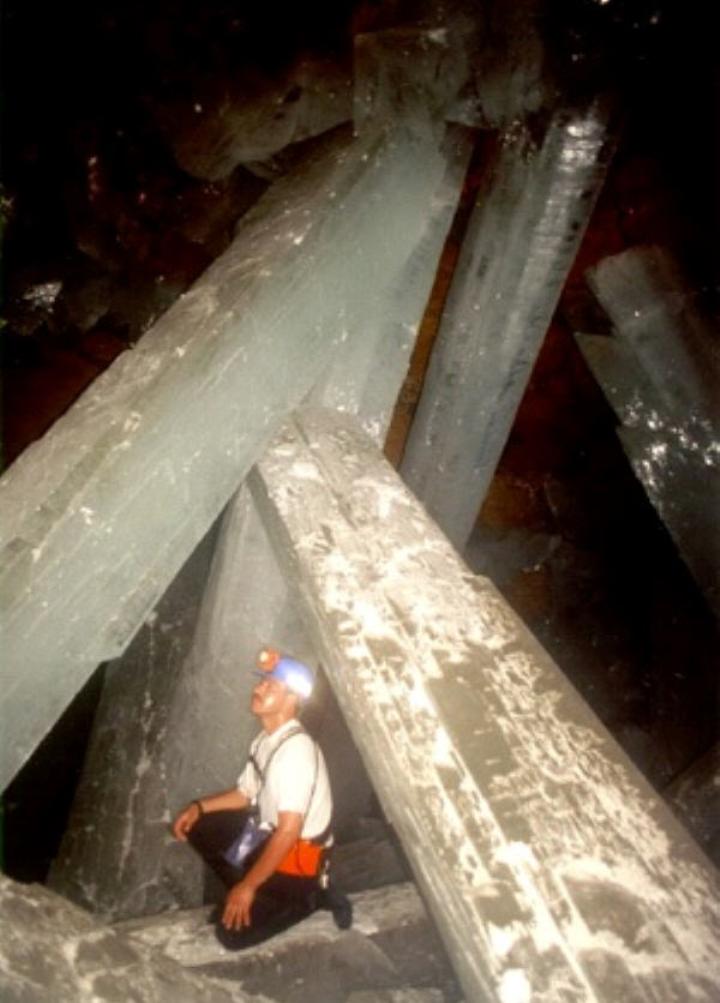 The world’s largest natural rock crystals come from two natural cave cavities found in the Naica Mine, in the state of Chihuahua, 112Km south of Chihuahua City, in Northern Mexico. The mine is worked for lead, zinc and silver.

The faceted crystals are made of Gypsum and are generally in the clear crystalline form known as Selenite.  Some of the giant faceted and transparent single crystals of selenite in "Cueva de los Cristales" or “Cave of Crystals” reach eleven metres in length.

Gypsum is the standard for hardness Degree 2 on the Mohs mineral hardness scale.

Gypsum (CaSO4·2H2O) is a common mineral in sedimentary environments. The crystal structure of this calcium sulphate dihydrate can be defined as alternating double-sheet layers of sulphates bound covalently by calcium ions and single-sheet layers of water

molecules linked by weak hydrogen bonds. The mineral gypsum has several varieties that differ by the shape of the crystals and their textural arrangements. The variety called gypsum alabaster is made of fine grained crystals. The satin spar variety is made of tiny fibrous crystals and has an attractive silky lustre. The most famous variety of gypsum is called selenite, which is characterized by colourless and transparent crystals.

At the Naica Mine there are several cavities with crystals, with two of these cavities now being famous for containing giant crystals. The Cave of Swords, found in 1910 at minus120 metres, and the Cave of Crystals found in 2000 at minus 290 metres.

The Cave of the Swords is a 75 metre corridor along a fracture covered by flattened crystals of gypsum of a few centimetres long (crystal blades). In addition,

the floor is spotted with bunches of meter-size elongate crystals called crystal swords.

The “Cave of Crystals” or “Crystal Cave of the Giants” is a chamber approximately 300 metres down in the limestone host rock of the mine. (The mine front is currently at minus 800m (2007).)

The temperature  in the crystal caves is a very hot 50ºC with 100% humidity.

This high temperature makes it very difficult for people to be in the chambers for more than 10 minutes, as the body starts to cook and the brain to dysfunction. That’s why in some of the photos you will see people wearing ice filled thermal suits and cooled-air breathing masks which allow access for up to an hour. Being here too long is risky and death is a possibility.

The limestone mountains holding the Naica mine are extremely rich in minerals. The ore minerals (silver-lead-zinc sulphides and sulphosalts) formed when the carbonate rocks were intruded by hot, acidic magma about 26 millions years ago. In addition to metal sulphides, the hydrothermal fluid circulation formed the mineral anhydrite (CaSO4), which occurs massively in Naica at depths below −240 m. The mining district is still under a thermal anomaly that keeps the rocks and ground waters close to 55ºC. The phreatic level (below the water table) is located at a depth of −120 m, so that the main engineering problem for mining and exploration activities in Naica is draining the water from the aquifer. This is achieved by pumping water at an average rate of 55 cubic metres per minute. Noticeably, the water is slightly supersaturated in calcium sulphate with respect to gypsum and slightly undersaturated with respect to anhydrite. 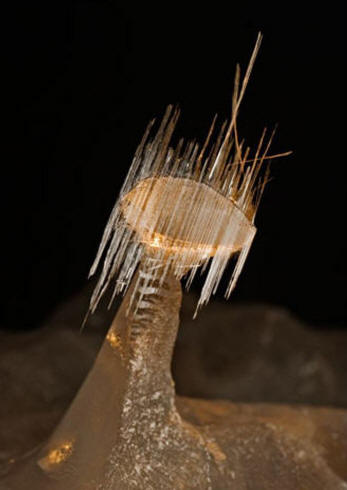 Formation of giant crystals of gypsum:

It has been proposed that these crystals came about or derived from a self-feeding mechanism driven by a solution-mediated, anhydrite-gypsum phase transition. This was written about in an article “Formation of natural gypsum megacrystals in Naica, Mexico” by García-Ruiz et al., p. 327-330 of “Geology” journal Volume 35, Number 4 (April 2007).

An easier way to express this is that the selenite crystals were formed by hydrothermal fluids emanating from magma chambers further down in the earth.

The analysis of the fluids trapped inside crystals has shown that the crystals grew from low-salinity solutions at a temperature of approximately 54ºC, slightly below the temperature (58ºC) at which the solubility of anhydrite equals that of gypsum. Sulphur and oxygen isotopic compositions indicate that Naica’s gypsum crystals grew from solutions formed by dissolving the anhydrite found in the mine. These and other analyses suggest that the megacrystals formed when the Naica district cooled below 58ºC, thus triggering the dissolution of anhydrite and the precipitation of gypsum.

In simpler words: The macrocrystals formed underwater, in a place where the hot (52°C) sulphur saturated deep thermal waters got in touch with external cold waters rich in oxygen, that naturally infiltrated from the surface. Along the surface separating these waters, that could not melt directly due to the different (higher) density of the deep mineralized ones, oxygen "diffused" into the lower layer with consequent oxidation of sulphur and sulphate ions, that caused an extremely light over-saturation of gypsum and therefore its slow deposit.
These conditions evidently lasted for a very long period of time (thousands of years) and the crystals had the possibility to develop to such incredible sizes. Finally, in recent times, the cave emptied naturally following the drawdown due to the mining activity pumping.

Sources Of Information and Web Site Addresses to visit for full information:

Basic description with lots of links that lead to much more complete information elsewhere.

The Official Naica Mine documentation site. Contains three video clips that show the nature of the research into preserving these amazing crystal chambers. Also several sections on the geology and project management. Click the “English” button at top right.

Basic description that gives further clues to who is doing the geological work on how the crystals developed.

A few pictures and some information.

Site by Richard Fisher, an early photographer of the Naica caves, with a good story write-up.

Good photos by Javier Trueba at this site, along with a good historical write-up.

Good and basic write-up about the caves and the preservation project.

A site where you can view about 30 photos (from various sources) and expand them up to full screen. Many are from Project Naica sources and show lots of detail, also with a little script with many pictures.

Goodly descriptions of Gypsum & Selenite to expand your knowledge.

(This script prepared by Lance Stewart.)